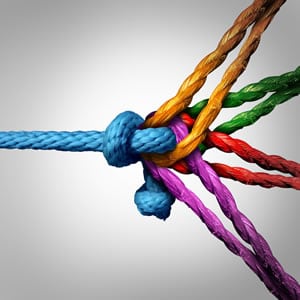 “My spouse has moved out – now what?” That’s a question that many people face. Often they decide just to do nothing, at least for the time being.

If the earnings are enough to support both spouses’ households, weeks of living separately may stretch into months and then drag into years, with no resolution in sight.

What’s the harm in that? Nothing, if you and your spouse have negotiated a legal agreement that specifies financial arrangements. Without such an agreement, though, you may be facing some financial perils.

1. You may not have control over your marital assets.

If you are living apart, and your spouse is handling the finances, you may not know what your spouse is earning, spending, investing, selling or buying. This leaves you out of the loop and out in the cold financially. If your spouse is running up debt on joint credit cards, guess what? So are you. If they are sued or lie on your joint tax returns, your assets are at risk. Your spouse may be using your time apart to move assets into their name alone, change passwords to joint accounts, spend money on toys such as new cars, motorcycles, electronics and fancy vacations, and stash large amounts of cash.

2. If your spouse’s circumstances change, your property settlement and support could too..

If your spouse’s financial fortunes fall and they lose their job, become ill, go on disability or suffer a business downturn, the alimony and child support you could expect to receive could be significantly impacted. And if you’ve been making do with less, your spouse can argue that you obviously don’t need as much to live on as you did while you were together. Even if you are getting enough to run your household, it is likely that you aren’t putting money away for your own future. So while your spouse is socking funds into retirement accounts for their own future, you may be falling behind financially as the years pass.

3. You could end up getting divorced in another state.

Laws governing divorce vary significantly from one state to another, and many states lately have been imposing limitations on the amount and duration of alimony that judges can award. If your spouse moves to a state which has enacted such laws, once they’ve established residency there, they can file for divorce. If they do, it is the laws of that state that will govern your property division and support, not the state where you have resided for years.

4. New relationships could change everything.

If you are in a new relationship by the time you get around to negotiating a divorce settlement, that may not sit well you’re your soon-to-be-ex. And if your ex has a sweetie, the new partner may interfere in the negotiations as an interested party who has your spouse’s ear. Even worse, your spouse could be funneling income to their new partner or even using the partner’s name when starting new successful businesses, thus reducing their income and corresponding support obligation to your family.

Divorce is an ending, but it is also a new beginning, especially if you’ve been stuck in a deteriorating marriage for years. Most people report being happier and even healthier within a few years of being divorced. Living apart can bring temporary peace to your life, but without a formal written separation agreement, you may be cruising toward chaos later. An informal separation without a document detailing the terms of your separation, how you will share marital assets, who is responsible for debt incurred on joint credit cards, and how the earnings and assets acquired during the separation are shared, is an invitation to expensive disputes and litigation later.

1 thought on “My Spouse Has Moved Out – Now What?”