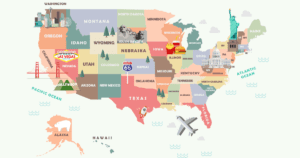 It’s strange but true that the state you live in plays an important role in how your marital estate is divided during your divorce. Living in one state versus another could mean you walk away with a lot more… or a lot less. It’s important to understand how state residency affects a divorce, especially since we live in an increasingly mobile society. Let’s look at how residency works and what your state of residence means for your divorce outcome.

This information is intended for general educational purposes only and is not intended to provide specific advice or recommendations. Please discuss your particular circumstances with an appropriate professional before taking action.

Different states have different rules when it comes to dividing a marital estate. If you live in a Community Property State, such as California, Texas or Arizona, the couple’s entire marital estate (everything accumulated while the couple was married) will be divided down the middle. This legal concept tends to be beneficial to women who are more likely to be the lower earners in the relationship. The majority of states use a different standard called Equitable Distribution. In those states, a judge has the ability to divide assets in a manner deemed “equitable.”

You can see how your state of residency might make a pretty significant difference to your wallet after your divorce, especially if you are the lower-earning spouse.

In this day and age, it’s not uncommon for couples to regularly move or even for one spouse to spend a significant amount of time in multiple states. For example, your husband may live in Maryland but stay in New York for long stretches of time for work. Or, you may have separated from your spouse and moved back to your home town in a different state.

What Is Your State of Residency?

Every state has its own way of determining residency. In most states, you can establish residency by living in the state for between six months and a year, depending on the state. That means you can’t move to a community property state for one month and then file for divorce in that state.

Certain states require you to establish a “domicile” in order to achieve residency. To be domiciled in a state means that you have a fixed, permanent home in that state. This is often the place where you vote, bank, go to work, and where your children attend school.

If you separate from your spouse and move back in with your parents in another state, you may not be able to establish residency in the new state if you still pay a mortgage and vote in the old state.

It’s a good idea to file for divorce before your spouse if you have residency in a state with laws that are more beneficial to you. For example, if you have residency in California and have been the lower-earning spouse during the marriage, it is probably a good idea to file your divorce in that state before your spouse in an equitable distribution state beats you to it.

Residency laws can be tricky, especially when you add child custody into the equation or if one or both spouses are in the military. Since every state’s laws are a little different, it’s best to work with a knowledgeable divorce attorney to determine whether you can use residency rules to your advantage in negotiating your divorce settlement. You can also get great information on divorce by attending a local Second Saturday Divorce Workshop in your community.