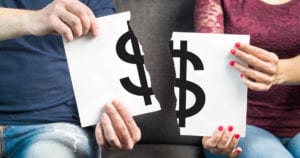 After what she describes as a “whirlwind romance” in a new article on Business Insider, Jorden Barcus married her love. She was 21, just out of college, and had almost nothing to her name other than student debt. Just eight months later, Jorden recognized that passion and romance don’t always make a strong foundation for marriage. She asked for a divorce. The cost of filing an uncontested divorce in her home state of Georgia was only $225, and yet, when all the dust settled, Jorden claims she spent $17,695 to separate from her hubby.

How could a young college grad with no children and no assets and who didn’t even hire an attorney to assist with her divorce ring up such a huge price tag? The answer to that question demonstrates that the price of divorce is far greater than attorneys fees and court filing fees. There are numerous hidden costs to divorce as Jorden found out. In the Business Insider article, she wrote, “what followed my decision to divorce was a year of financial turmoil and painful, damaging decisions I had to make about debt to get out of the marriage and begin a life of my own.”

Here is a quick list of the major expenses Jorden incurred related to her divorce:

Jorden’s home state of Georgia requires that couples be separated for six months before filing for divorce. Since Jorden instigated the divorce, she decided to move out. This required her to shoulder the cost of an apartment on her own, come up with a security deposit, and purchase all new furniture and supplies.

Jorden’s husband cosigned her car loan, so in order to get him off the title, she had to refinance. This required her to pay off the original loan and take out a new one. Since she applied for the new loan by herself, she faced a higher interest rate and an extra year of payments.

Another step Jorden had to take was to free her iPhone from her husband’s plan. In order to switch providers, she had to pay off the remaining cost of her phone through the original plan.

During their marriage, Jorden’s husband bought a truck, and she cosigned on the title loan to help him get a better interest rate. Now, if he ever defaulted on the loan, Jorden could be help financially responsible for it. Since Jorden’s husband didn’t want the divorce, he refused to take her off the loan.

Jorden made the decision to pay off the entire title loan herself by taking out a personal loan. In essence, she paid for a truck she didn’t even own.

Ironically, one of the lowest costs related to Jorden’s divorce was the actual price of the divorce itself. Since her husband refused to pay, Jorden shouldered the entire cost of the divorce in Georgia.

Divorce devastates the heart and soul even if you are the one asking for the divorce. Many men and women going through divorce don’t anticipate the toll the stress and anxiety will take on them.

Jorden explains, “The guilt I felt for leaving him, the embarrassment at explaining to others what was going on, the financial strain from having to separate everything myself, and the stress that I endured resulted in panic attacks, anxiety, and waking up in a cold sweat…”

Eventually, Jorden decided to seek out therapy to help her address the emotional challenges.

The True Cost of Divorce

Jorden’s story is vivid and instructive. Even after only eight months of marriage, divorce still came with a large price, often in ways Jorden never anticipated. After calculating all the costs related to her divorce, Jorden estimated that she spent $17,625 to separate from her husband.

Jorden ends her story on a positive note but also includes an important warning:

“While I am now happy and healthy and on a secure financial path, starting out my 20s with such huge costs and taking on a large amount of debt on top of what I already owed in student loans set me up for a rough transition to young adulthood and set me back in terms of financial health and progress.”

Jorden encourages anyone considering divorce to speak with a financial advisor, and we couldn’t agree more! Jorden was very courageous to share her story on Business Insider, and we know her experience will help other women and me make better financial decisions during their divorce.

It’s important to understand that this was Jorden’s experience under the laws of her state and given her circumstances, but each divorce is different, and the law differs from state to state.

You can read Jorden’s full story on Business Insider and learn more details about each divorce cost.

If you worry about the hidden costs of divorce, consider attending a Second Saturday Divorce Workshop near you. You’ll hear from divorce professionals, including a financial expert who can give you more advice on the true cost of divorce. We also invite you to read our archive of financial divorce articles for even more great information and advice.